Increasing Exports During A Global Pandemic

As the world’s worst pandemic created global supply chain chaos, Open Country transported a record 321,000 tonnes of dairy during 2020/21. That’s a 6% increase on the previous season.

The peak came in November 2020 when we shipped 46,000 tonnes in a single month. That’s the weight of 4½ Eiffel Towers leaving New Zealand shores in 30 days.

Here’s the story about how the Open Country logistics team gets the job done.

When the giant container vessel ‘Ever Given’ ran aground in the Suez Canal in March this year, more than 400 vessels were forced to wait for several days. “Several days” may not sound like much, but it set off a ripple effect that was felt around the world, even in New Zealand.

The Covid pandemic has also bent the supply chain. The Yantian port in China, the world’s third largest, closed one of its terminals for an entire month when a Covid outbreak occurred in June.

Then in July, the port in Bluff temporarily closed when 14 crew aboard the container ship Mattina tested positive for the Delta variant. This port services Open Country’s largest manufacturing site.

Other disruptions are driven by market forces. With transport demand skyrocketing, US shipping companies are now chasing the money. For them, it makes commercial sense to send more ships across to China for $20,000 a container than down to New Zealand for $1000. Accordingly, supply routes to the Pacific have become less frequent and less direct.

Plans A to F

There’s a book called “Getting to Plan B” by John Mullins and Randy Komisar. No one in Open Country’s logistics team will read it. In the ever-changing world of global transport, having only one Plan B is nowhere near enough. Greg Sewell, head of Supply Chain, explains.

“The global supply chain is chaotic right now. Has been for over a year. When my people are sorting out routes for getting products to market or products in for processing, we have to have Plans A through to F. I’m not kidding; changes happen so frequently.”

Greg’s team have been forced to adjust.

“Previously, there would be a vessel heading our way every week from most lines. Now there’s nothing for 2-3 weeks, then two ships arrive in one day while a third skips the port. So now we have to get 300 containers on a US ship instead of 100. There’s no point in complaining. You just get creative and work around it.”

For the logistics team, every disturbance higher up the supply chain has run-on effects that have to be managed back home at Open Country.

“Think about shipping delays from an inbound perspective. We’ve got milk from our farming partners arriving to be processed. To do that processing, we need to ship materials in from Australia, Europe or the US. We can’t let delays over there stop us doing our job here.

“Same for packaging. If packaging products from Thailand are bottlenecked somewhere, we still need to parcel up our milk products and send them around the world. Our farmers rely on us to do that.”

More Inventory is One Solution

Absorbing the supply chain sting takes skill. To keep our processing and packaging systems running smoothly, Open Country has opted to hold more inventory. It’s an approach that many have had to take.

“Prior to the Global Financial Crisis, most companies ran Just-In-Time inventory systems,” says Greg. “The idea was to run it lean, to order only as much stock as you needed. That way you lowered holding costs, eliminated wastage and spent less cash on inventory. Everyone did it, but that’s all gone out the window. The JIT system only works when you can rely on product turning up, and we can’t.

“Open Country now holds more raw material stock in our warehouses so that when things go wrong, we have what we need. Is that the most efficient system ever invented? No, but it’s what we have to do to keep our milk products moving.” 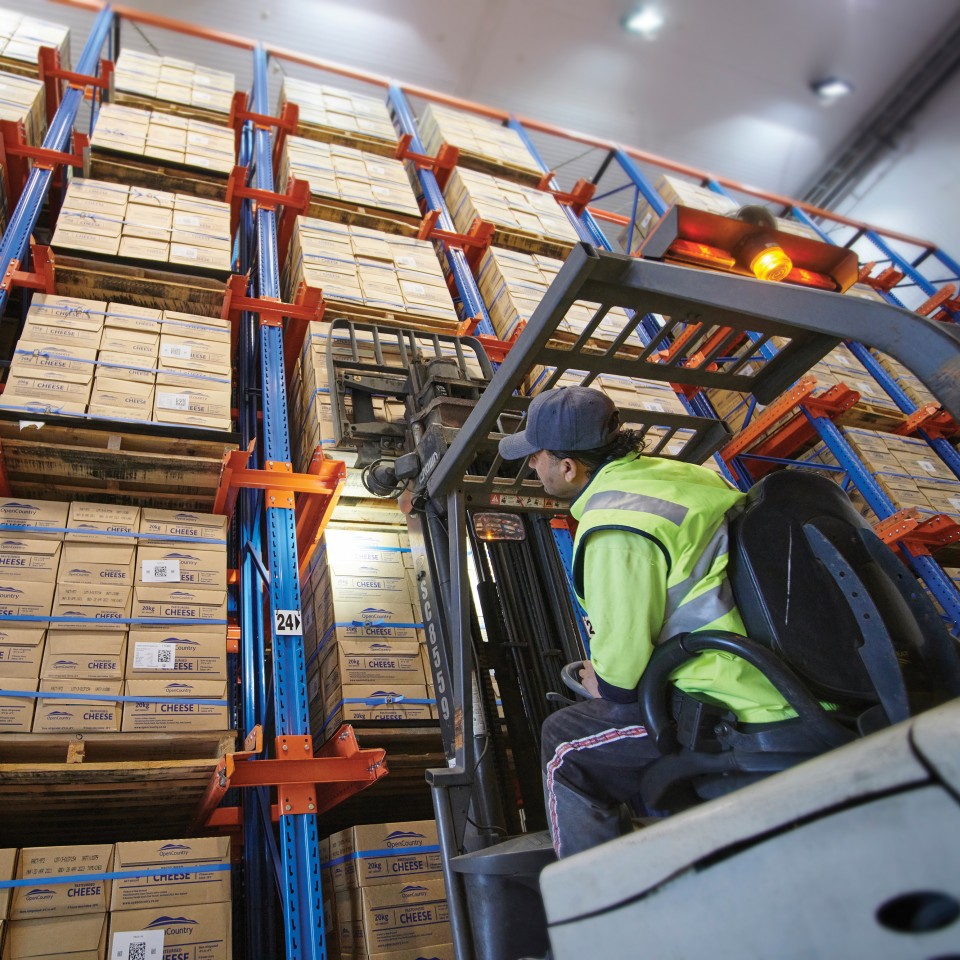 There’s another skill that Greg and his team employ to bring order to the supply chain chaos. He likens it to playing Snakes and Ladders. If Ladders are the successful routes towards the right destination, Snakes are the setbacks that force Greg’s team to alter their transport schedules.

“In logistics, we have to stay vigilant with every transport route that involves our products. For example, we typically move some products in the USA from South Dakota through Minnesota, and from there to the coast. But when something happens that causes delays, we quickly look for alternatives; maybe we go through Vancouver or San Francisco to make it to our ship on time.”

There’s another challenge Greg has to consider; he and his people aren’t the only ones playing the board. Other companies are scanning the same shipping lines looking for options. That means that a ladder available at 4pm could be gone by 5. Decision-making speed is crucial. To work the system, Greg shares his authority with the crew.

“I have a helluva team. They’re often booking and rebooking shipping routes 4-5 times to get our farmers’ products to market. They get things done because they’re free to quickly assess the situation, crunch the numbers, then make a call. It’s all about trust and they know I’ll back them.

“The thing to appreciate about my team is that ‘Listen-Act-Deliver’ isn’t just a tagline for us; it’s like a promise or something of that nature. We know others have worked hard to put milk products in our hands, so we have to get it to global markets on time. It’s a must. If that means pulling a tonne of hours, we do it.”

Greg knows the work his people are putting in. He’s proud of them, but he also keeps a watchful eye on how everyone is doing.

“When we’re working big hours, we need to look after each other. I try to get face-to-face with each person to make sure they’re okay and to hear their concerns. We love what we do, and there’s nothing more satisfying than seeing a complicated plan come together.”

We export our premium dairy products made from high-quality New Zealand milk to over 50 markets throughout the world.